Join us for a Q&A with the original designers of History of the World!

The first edition of History of the World was first released in 1991. Now, with the set to be released by Z-Man Games in early 2018, we reached out to the original designers to provide insight into the history of History of the World. Join us as the Ragnar Brothers—Steve Kendall, Gary Dicken, and Phil Kendall—discuss the evolution of the game as well as details of the remastered version. 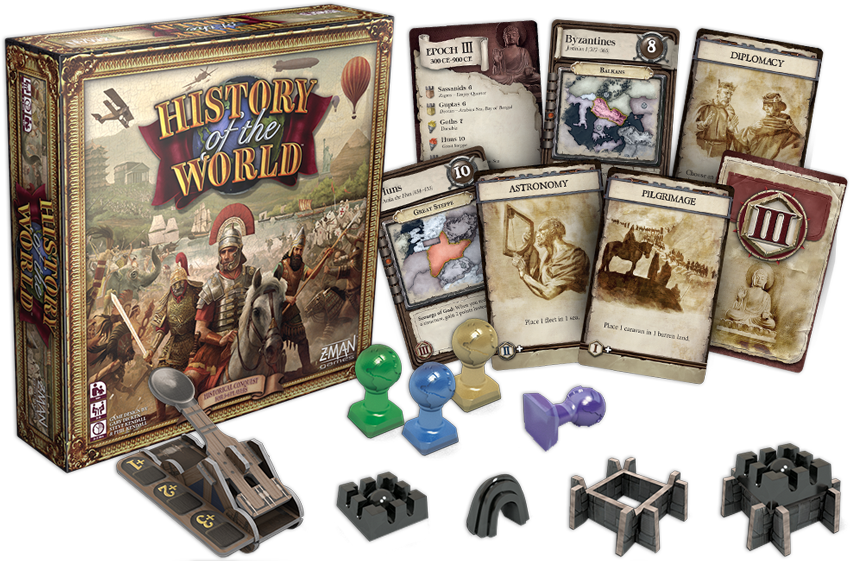 So History of the World began quite small. How did it evolve into a game about the whole world?

There was no evolution between the two, rather a decisive moment of inspiration. In the Spring of 1987, I was a new teacher in a school and at a first parents' evening was twiddling my thumbs waiting for parents to stop for a chat. I simply thought, 'What would be a great game?' and the words 'The History of the World' popped into my head. It was some years later that we removed 'The' - don't like being too pretentious!

Beginning with the first edition in 1991, History of the World has gone through many iterations, including A Brief History of World. What are some of the major differences between the many versions?

There are many smaller differences between the game which are often the bi-product of major developments and support these developments. For each of the designs, I'd like to choose one key change that seemed to drive the game forward.

Gibsons and Avalon Hill (their versions appeared almost simultaneously) were keen to make the Events into a deck of cards — in the original we could only afford tokens. This meant that in their versions we were able to expand the number of empires by including Minor Empires and Kingdoms in the event pack.

Hasbro produced their version and were able to include plastic figures. In order for this to work (and to be affordable), armies were no longer allowed to 'stack' in a land. This in turn made the game more fluid.

When Ragnar Brothers developed A Brief History of the World our main objective was to make the game play in a shorter time period (the earlier versions could take up to four hours). We reduced the number of Epochs to six, reduced the number of lands on the map and re-designed the combat system to allow armies to overrun lands without the need to re-roll dice. OK - so that's three changes for A Brief History of the World!

Do you have any other interesting stories from while you were working on the first edition game?

The game was produced at a time when British companies were few in number and long before the present opportunities afforded by indie game designing, Kickstarter, etc. Using a computer was a novelty and I spent long Saturday mornings in the school's IT suite designing the Empire cards (eventually someone told me how to speed things up by increasing the amount of memory ascribed to the font cache).  Saturday afternoons were spent in the launderette drawing images for the Event tokens.

We had to source components from a range of different companies, using local printers and box makers. The cloth for the map was bought from one manufacturer, then Gary and I hand delivered and collected it from a printer in North London. Once the professionals had done their bit, we set to work counting out Empire cards and sticking paper prints to cardboard to create counter sheets.

The biggest job was turning three massive rolls of cloth into 'tea towel' maps. These had to be cut, then hems ironed and sewn and finally folded. After completing a dozen or so we noticed a significant mistake and a land border had to be tippexed (for our American audience, Tipp-Ex is a line of correction products similar to Wite-Out) and re-painted with printer’s ink - Gary loved it. All components were then boxed and sent for shrink wrapping. (Some years later we invested in a shrink wrap kit and spent happy hours blasting each other with hot air - oh the joy!)

How did you manage to design a game that simulates history without it being overly long?

In 1990 many games were themed on empire building and the style of play was one of growing, getting stronger, building, growing some more, building an army, fighting, building, growing some more etc. etc. Our first designs of History of the World did the same and ground to a halt some time soon after the Egyptian empire. It took a lot of decisions to reach the point where an empire only 'happened' the once (with a given number of armies) and then simply hung around for as long as possible. That's basically how we dealt with the 'overly long' problem. Once this was achieved then all we could do was try to replicate the empires in terms of size - we already knew their chronology and location, which made things a whole lot easier.

Another key element to achieving 'historical accuracy' was and is to award different amounts of victory points for different areas of the map. Ultimately however (and what we didn't at first realise) is that players enjoy the game because it doesn't replicate history; the Roman invasion of China always goes down well.

We were involved from the start in as much as we proposed some radical changes to the end game stage of History of the World and then (Z-Man Head of Studio) Steve Kimball brought his breadth of knowledge of how to bring a design ‘Home’ so to speak and we all agreed on the shape of this version of the game.

All three Ragnars took part in play testing during the genesis of the game and I feel we have achieved a tighter game than previously, which plays in a reasonable length of time but still delivers the broad brushstrokes of history without falling into the trap of simulation and becoming predictable. I think players will enjoy the fabulous artwork of the game board and the richness of the Epoch cards. I still get a tingle when I choose my card and anticipate the road my Nation will travel down!

What excites you the most about the new version of the game?

Visually it is gorgeous and that quality includes the box, board, cards and counters. The figures look great and the overall feel of the game is one of high quality. Players will notice some new minor kingdoms/empires and events which will mean choices need to be made and strategy altered on the fly perhaps – personally I love games that force me to make decisions and feel engaged in the gameplay.

What are some things about the new version that might surprise long-time History of the World fans?

The new version has numerous small tweaks in many ways that all work towards making the final Epoch more open and less predictable in terms of who will win – this was an issue with the early iterations of the game and I think both old and new players of History of the World will find it goes to the line before you know the final result.

How are the empires and events distributed at the beginning of each epoch? How does this compare to the Avalon Hill version of the game and A Brief History of the World?

The card drafting system (at the beginning of each epoch) broadly follows the one we established in A Brief History of the World as we feel it delivers the fairest distribution related to player scores and helps keep everyone in with a fighting chance! (In the Avalon Hill version of the game, the drawing player could examine their drawn empire card and decide whether to keep it for themselves or give it to another player who hasn’t gotten an empire card. In A Brief History of the World, however, players draft empires with the player in last place choosing first.)

I love games that force me to make decisions and feel engaged in the gameplay.

No one wants a runaway game where once in the lead a player can’t be caught. In the new Z-Man Games version of History of the World, the current leader will have to work hard to maintain that position.

How do you think the board game industry is different now than it was when you were first putting together History of the World?

We’ve mentioned various changes earlier in the piece. For a small publisher such as ourselves, it was very much a cottage industry. Yes, we could get others to produce things beyond our capabilities – most of the printing, for instance, or box production – but much of the rest was delivered by ourselves. For instance, a friend who had done art at college designed the box top, Steve did the counter artwork by hand, maps were cut and sewn by us, counters mounted, box contents assembled, etc. etc.

Obviously nowadays, board game production has become literally an industry. Production standards are unbelievable because they are achieved by skilled professionals, not by games players who tend to be doing things as an adjunct to their main job.

Were there any tweaks to the History of the World formula you wanted to see made with the new version? 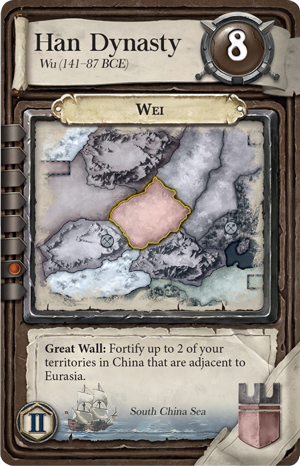 For instance, several Chinese empires get to place two forts at the end of their turn adjacent to Eurasia. This very neatly creates the ‘Great Wall’ effect, in that China will repeatedly re-establish its northern frontier, and so act as a bulwark against the barbarian hordes. The fact that these features mirror the actual history means that the game has even more ‘shape’, without the players feeling in any way constrained.

How do you think reducing the game to five epochs affects things compared to previous versions?

We were slightly worried when the idea of reducing the number of Epochs to five was first moot, fearing that it would dilute the Empire selection process which we feel is a key element to the game (this despite the fact that we ourselves had already reduced the original History of the World from seven to six Epochs). Having played the new version several times, though, it really doesn’t take away from the experience, and has the added advantage of substantially reducing playing time – something that is essential if new players are to be attracted to the game.

The original History of the World was released nearly thirty years ago. What do you think gives it such lasting appeal?

History of the World has a wonderful mix of simplicity and detail. The basic system is so easily mastered – collect your armies, conquer lands and then score for what you have achieved – whilst at the same time delivering a level of detail that makes you feel you are actually shaping human destiny. Whether you are building the Roman Empire or trying to defend your possessions in the face of the Mongol onslaught, History of the World puts you in that historical role like no other game.

Enter the fray and build an empire that will be remembered forever. History of the World is scheduled to be released in the first quarter of 2018. Head to your local retailer to pre-order your copy today, or you can place your pre-order through Z-Man Games .