A Q&A with the Designer of Kingsburg

The new version of Kingsburg is set to be released early next month. In anticipation of the game’s return, we asked designer Andrea Chiarvesio to reflect on the game and give us an idea of what to expect in this version.

Can you tell us a bit about the process of making a new version of Kingsburg?

Kingsburg was released 10 years ago, and it has been quite popular since then, so the expansion has been out of stock for some time. Our Italian publisher approached us with the opportunity to create a new version combining the base game with the expansion, and we of course agreed also to develop a new expansion module for the game, on the condition that it would have been sold separately, for people who already own the previous version.

What were some of the challenges of developing this version?

We already put in the original game everything we thought needed to be part of the game. So, creating an additional module was indeed quite a challenge because we wanted to insert something interesting without breaking the balance and the general flow of the game.

Kingsburg was originally released 10 years ago. What do you think gives it such lasting appeal?

It was the first game to introduce the “dice allocation” as a form of worker placement, so it kind of inspired or at least started a whole new category of games (this is perhaps the thing I am most proud of about the game). It’s fairly easy to teach and was designed to be accessible to people new to the gaming hobby. The fantasy theme and the very cool art probably did the rest. 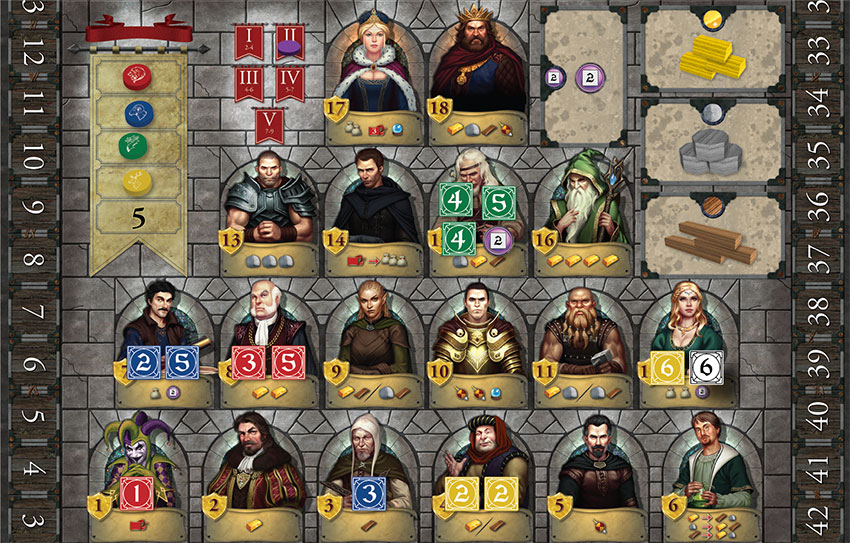 Were there any changes you wanted to make after the first edition was released?

In our originally playtested game, the reward from the Queen (advisor #17) was different: four Victory Points and nothing else. We were asked from the publisher at that time to change it, so we came up with the current effect (two goods of your choice, three victory points, and secretly looking at the top of the enemy deck).

We thought about “restoring” the original Queen for the new edition, but then decided not to do it since in ten years the “slightly overpowered Queen” has become part of the game experience and strategies. It also become kind of a statement about who is the real power behind the throne in Kingsburg, if you will. 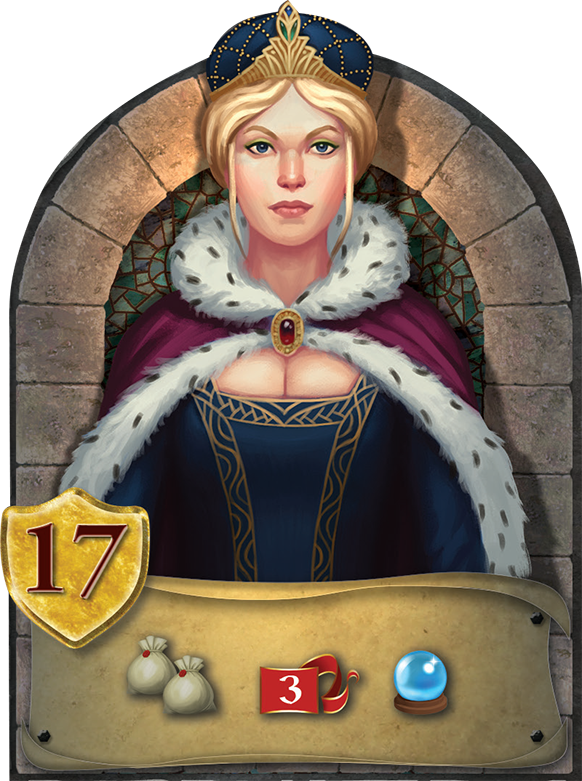 What can we expect from the Alternate Advisor rewards module? How much does it change the game?

It’s not a radical change, but it will make, for instance, the availability of soldiers or certain goods very different over the span of "game years”. You won’t be able to build the Stables and be sure to benefit from its bonus in the later years, or you might discover that on the last year there are fewer stones or gold around to finish your Cathedral. On the other hand, some goods might become easier to obtain, or there might be more soldiers available so your military strategy might be hindered. It really forces you to focus on what is available now and trying to predict what will be available in the future.

How did you come up with the new rewards?

We wanted to add some interaction between players that is not strictly linked to dice placement. It’s something we willingly avoided putting in the base game, and we still limited it in the previous five modules, so it was time to add a little bit of spice to the new rewards. Also, there were a few types of rewards that were cut from the base game because of their complexity, so we were able to sneak them into the new module.

Do you think any of the councilors new rewards will become more popular than their existing rewards?

I love the new Jester. And the Wizard might have a strong comeback with his new effect (five Victory Points).

Have you heard any good Kingsburg stories by fans of the game over the years?

What I really always enjoy is hearing stories about a player’s significant other loving the game. The game was born in my mind as a game that would have appealed to my significant other, and that could have been eventually played with kids. So, every time I hear comments from players like “my girlfriend really loves the game” or “I always play with my husband and our kids and we have so much fun,” I am deeply moved and I know that my goal has been reached to an extent I did not even imagined when creating the game.

Ten years later, what are your thoughts about Kingsburg?

Games are like children, so I consider this new version the graduation exam. I feel proud and I love to see the game's potential once it is released. It’s definitely one of my games I am most proud of.

How does it compare to the other games you’ve worked on?

It’s lighter and more casual (I would really use the term “Gateway game” when it comes to Kingsburg) than many other games I designed (Olympus and Signorie are truly ‘gamers games’ while Hyperborea is somewhere in the middle but still not a gateway). Probably Arcanum is the closer game to Kingsburg in terms of target audience and style of play. In some way, also the upcoming Richard the Lionheart is a return to a gateway game, while Warstones and Movie Trailer are the craziest and wildest members of the pack!

I try not to design games if I feel there is no market for them, so they are all unique to my eyes in some way. At the time I designed Kingsburg, the boardgaming market was smaller, so there was probably more room for new games, and I was fortunate to help start to a whole category of games.

Did any games inspire the design of Kingsburg?

My starting point for the base mechanic was something like “I want to make a game like Settlers of Catan, just better”, so absolutely yes! I believe we all take inspiration from other games, even unconsciously. I had recently played Roma from Stefan Feld (one of the game designers I appreciate most) and it intrigued me with the idea of using dice in a different way than simply selecting something randomly. Also, War of the Ring from my friends Roberto, Francesco and Marco was a partial source of inspiration.

When the game was almost finished, I heard about To Court the King that seemed to have a very similar theme and a lot of dice so I was a bit worried about the two games being released almost simultaneously. Luckily, I found out later that To Court the King has a lot more in common with an improved version of Yahtzee than with an improved version of Settlers :-)

Besides your own, what are some of your favorite games?

It’s a very tough question, since I have so many favorite games and they tend to change over time. I am madly in love with Star Wars: Rebellion, to name one (and also because I always aspired to work on games based on licenses I love). I play a lot of Arkham Horror LCG with my friends, and I had a deeply satisfying experience with Pandemic: Legacy and T.I.M.E. Stories.
Among my all-time favorites you can find masterpieces like Twilight Struggle, Here I Stand, and Through the Ages. Of course, I also play a lot of Eurogames like Puerto Rico, Lorenzo il Magnifico, Caylus, Castles of Burgundy, Terraforming Mars, and many more. I forgot to mention recent games like Scythe or Clank! but really there are so many games among my favorites, I am sure I left more than a few off this list…!