Get a look at the solo rules for Gaia Project

New worlds beckon you from deep within the vast reaches of the galaxy. Covered with fiery volcanoes, murky swamps, hard titanium, and all manner of other materials, these planets are capable of forging a diverse array of life forms in their inhospitable climes. As each of these alien species develops the technology to move beyond their home worlds and colonize the galaxy, they’re bound to cross paths.

In Gaia Project, up to four players can take command of these alien factions and compete to develop the most advanced galactic civilization. Along the way, they race to colonize new worlds, unlock new technology, terraform entire planets, and much more. But this is far from the only challenge the game has to offer. Gaia Project also gives you the chance to test your skills against an artificial opponent in solo play. This adversary, known as the Automa, plays by its own rules, mimicking the actions a human might take using a straightforward, easy-to-manage system. In our last preview, we took a look at some of the fourteen alien factions included with the game. Join us today as we break down the challenges you’ll face as you wander the stars on your own.

There are many ways to build an interstellar civilization and, reflecting this, Gaia Project gives you many ways to develop your faction. This variety—along with the diverse powers and abilities of the factions—gives you a large amount of freedom to experiment with different strategies. This variety carries over into the solo game. You don’t have to sacrifice any decision-making or strategic depth when playing against the Automa: you follow the same rules you would in a game against human players. The Automa, on the other hand, plays by a simplified ruleset that helps it behave like a human player without being overly cumbersome to manage. 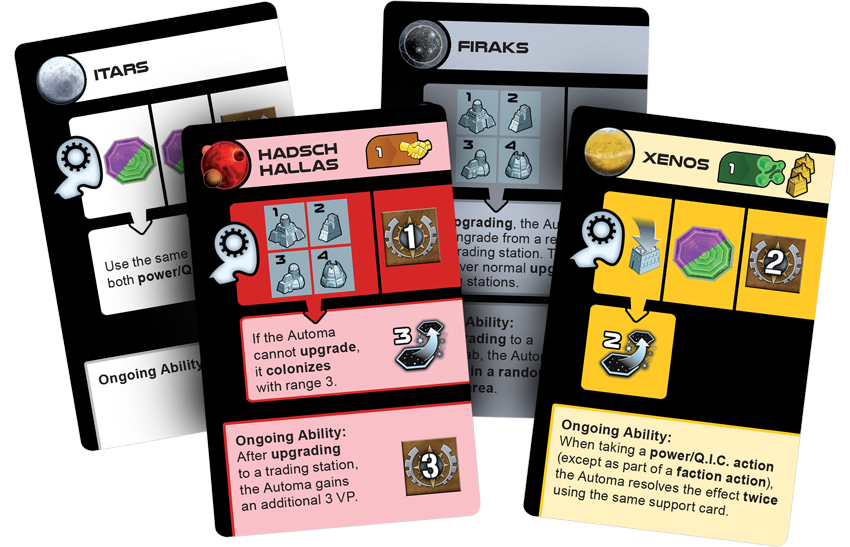 To this end, a number of factors combine to make the Automa a dynamic opponent that behaves differently every game, beginning when you choose an Automa faction card to play against. Faction cards form the basis of the Automa’s behavior during a solo game and help it replicate the actions those factions might take.

Condensing an entire player board into a single card, the faction cards outline your artificial opponent’s starting attributes and special abilities, giving you a unique challenge from the beginning of the game. When playing as the Terrans, for example, the Automa starts the game at level one of the Gaia Project research area and seeks to advance in this area as much as it can. Additionally, it targets Transdim planets for colonization more often than others, playing to the Terrans’ strengths much like a human player would. Each of the faction cards gives the Automa a distinct personality and approach that you must work around during your solo games.

While the faction cards provide the Automa with a basic personality, they don’t control how it acts each turn. For this, you must make use of the Automa decision cards. This deck drives the Automa’s actions each round using a simple system that keeps your opponent acting as an intelligent force.

Each turn, the Automa combines two decision cards to determine its approach for that turn. These cards decide everything from what bonus tiles the Automa will take to the number of victory points it scores at the end of the round. More importantly, however, these cards determine the actions the Automa will take. Just like a human opponent, it might build a mine on a planet, advance up the research track, or upgrade a structure, among many other options. 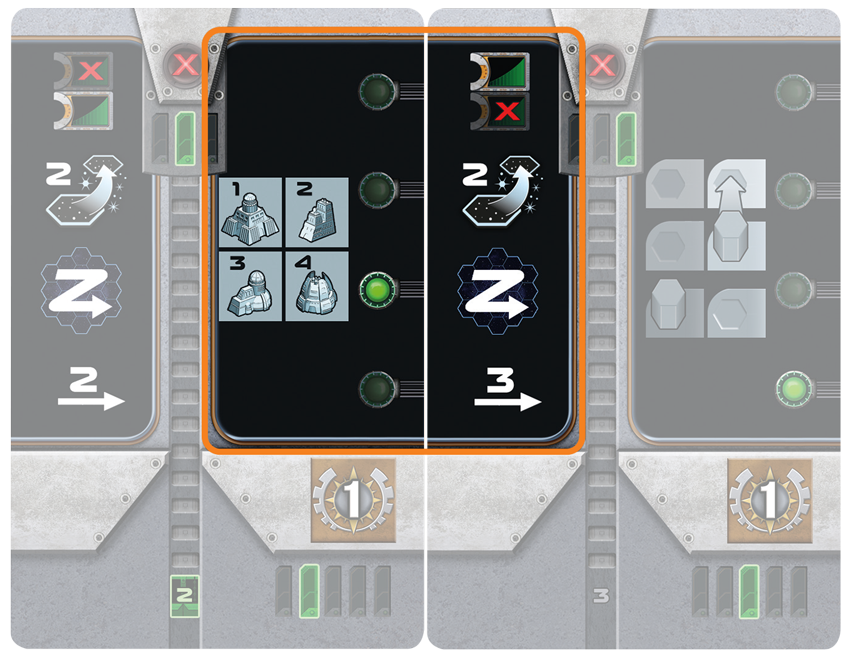 In addition to what the Automa will do, it is important to know where it will go. Where the first decision card determines the action the Automa will take, the second card determines the actual target of that action, with the combination of cards deciding the whole action. This simple combination of cards helps the Automa make moves a human player would take while also keeping it from being too mechanical. No matter how the Automa behaves, it will continue to pose a challenge for your galactic ambitions.

The galaxy is a huge place, filled with billions of stars. You’ll face many challenges—both human and non-human—in your quest to colonize as much of it as you can. Experience everything the galaxy has to offer with the Automa rules for Gaia Project!

Take your first steps into the galaxy. Gaia Project is set for release on December 14. Head to your local retailer to pre-order your copy today, or you can place your pre-order through Z-Man Games here .