Z-Man Games is proud to announce the upcoming release of Valletta, an intriguing game of strategic planning to create a great Mediterranean city. 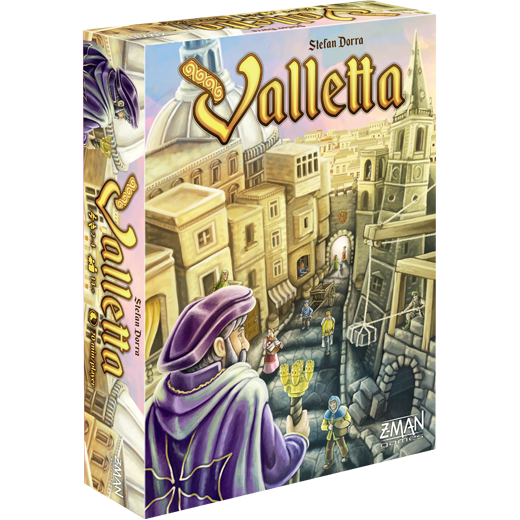 The Order of Malta has laid the first stone of what will become the capital of Malta, and you are one of many who have been entrusted with overseeing its construction. Seamlessly blending elements of deckbuilding, worker placement, and resource management games, Valletta beckons two to four players to return to 1566 and contribute to the construction of this powerful city. 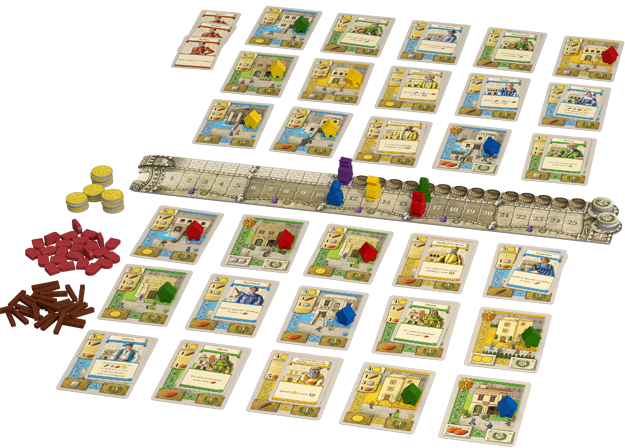 The island of Malta is a hive of activity during this period of rapid growth. The sound of masons and carpenters hard at work mingles with the din of merchants peddling their wares in the marketplace. These craftsmen produce the raw materials that will be used in building projects throughout the city, while the businessmen keep the economy booming. Amongst it all, Jean Parisot de Valette, the man who commissioned the construction of Valletta, roams the streets overseeing construction.

Each craftsman and businessperson contributes to the city in their own way; it’s up to you put them to the best use. Starting with a deck of basic cards, you construct buildings to add more workers—and possibilities—to your deck while competing with your friends to finish projects and become a master builder.

Build Your Deck, Construct the City

Combining the addictive progression of a deckbuilder with the deep strategy of resource management, Valletta presents an innovative blend of styles. With so many projects to complete and important officials on hand, the city’s construction creates a golden opportunity for enterprising builders to make their mark and improve their standing. But you must start at the bottom if you’re going to make your way to the top. 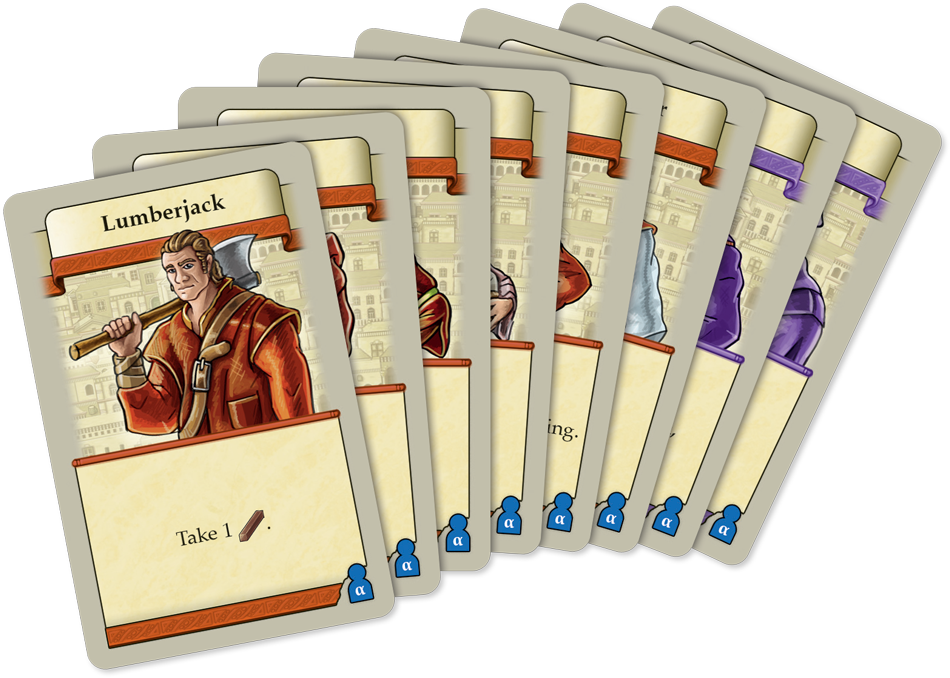 Each player begins the game with an identical deck filled with brickmakers, lumberjacks, shopkeepers, and other craftsmen. These character cards provide the goods you’ll need to construct buildings throughout the city. New buildings mean victory points and, depending on what cards you play later, more resources.

Most importantly, constructing new buildings also adds more cards to your deck, which gives you more flexibility and economy in each subsequent turn. Add green character cards such as the Banker to take multiple goods each time you play them, or blue characters like the Artisan to unlock powerful special abilities. 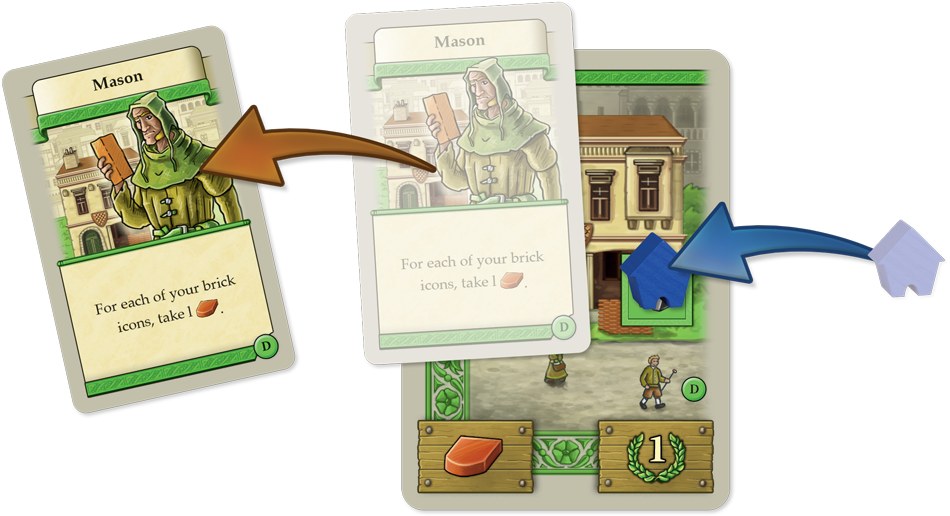 Play well and you might even draw the attention of a historical figure critical to the development of Valletta. These yellow characters help you score points for meeting certain conditions. Play Philip II of Spain to score a point for each of your green buildings, or spend one wood, one stone, one brick, and one gold when you play Grand Master Pietro del Monte to quickly score five points. Each new card represents an opportunity to shape your deck however you see fit. Your choices determine what actions are available to you in the future—and shape the face of Valletta itself.

As each new building goes up, space for new construction becomes increasingly scarce. It’s imperative that you generate resources efficiently to claim as many spaces as possible. No matter how useful the cards in your deck are, they won’t live up to their potential if they’re not played effectively.

On their turn, a player chooses three of the five cards to play from their hand. Cards are resolved in the order that they’re played, opening the possibility for all sorts of creative configurations. Use your first two cards to gather the resources you need to construct a building with the third. Or play the Builder to construct a building, then copy his ability with your Apprentice to immediately upgrade that building to generate more victory points. 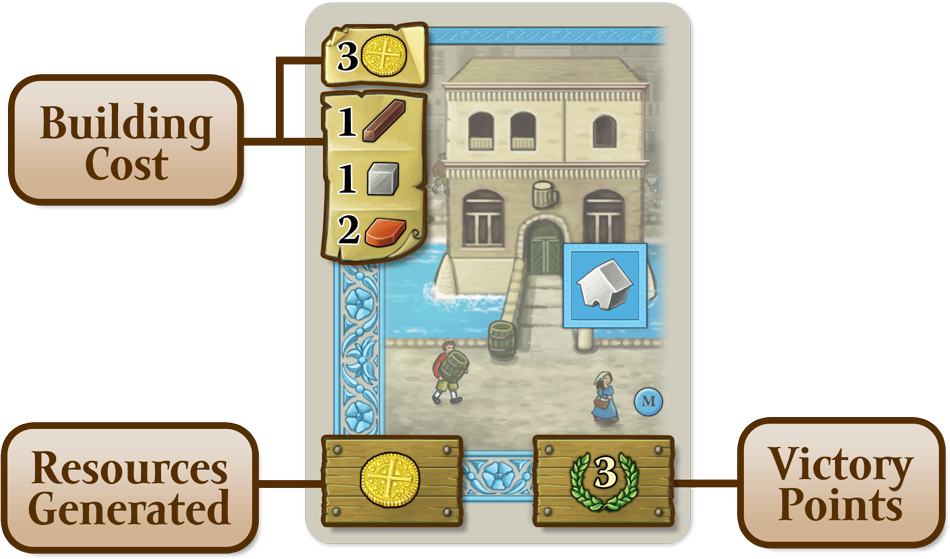 In Valletta, your actions aren’t confined by the cards in your hand. You may use your cards to determine the direction you take. Make the best use of the opportunities in each new hand and leave your stamp on Valletta for generations to come!

Every building that goes up and every point scored brings the game one step closer to the end. With limited time and space, as well as multiple construction projects happening all over the city, it’s important that your work be recognized.

Fortunately, Jean Parisot de Valette himself is ever-present, examining the magnificent bastions and beautiful baroque buildings being constructed. If he happens to be in the area when you construct a building, you receive two bonus points. Play his card to advance him up the street and plan your construction projects while he’s near to gain a critical advantage over your opponents. 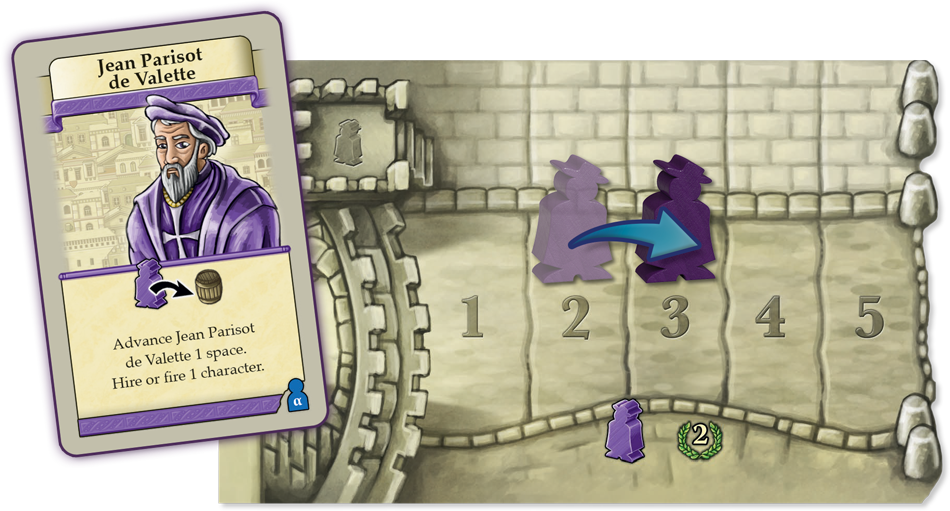 On top of taking notice of your projects, Jean Parisot de Valette also offers the rare opportunity to reshape your hand of cards. When he’s played, you can fire a character card, removing it from your hand to the general supply, or hire a new character from the supply. Using this power can alter the course of a turn significantly, setting up a dramatic flurry of activity.

Be careful how often you use Jean Parisot de Valette. The final phase of the game begins once he reaches the end of the street. This sets off a flurry of activity as players put their final plans in motion!

Opportunity is in Your Grasp

Everywhere you look, new buildings go up, each one grander than the last. Workers toil on every corner to produce the resources that will become a part of this mighty city. Amidst all the chaos lies opportunity for cunning builders to make a name for themselves.

Seize the moment and become a part of history in Valletta, arriving soon!