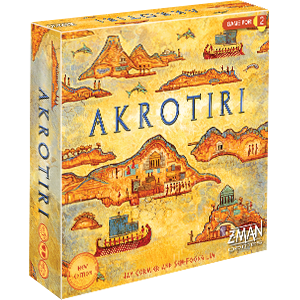 It all began with a map—a map that supposedly led to a legendary Minoan temple. Since then, you’ve set sail across the Aegean Sea, tracking down leads and hunting clues on mysterious islands. Each step brings you closer to fame, but you are not the only one racing across the sea in search of lost temples. You seem to have drawn the interest of some competition.

The tile-laying, treasure-hunting adventure continues in the revised edition of Akrotiri, available at retailers now!

First released to general acclaim in 2014, Akrotiri returns players to Classical Greece and the then-uncharted Aegean Sea. Map cards in hand, it is up to you to add Land tiles to the board in search of the landmarks that will guide you to forgotten temples. But these temples will only reveal their secrets to explorers willing to boldly sail into treacherous waters. Race to match your map cards to the board and reach temples before your opponents discover them.

But these voyages will be costly. Beginning on the central island of Thera, you must seek out the resources needed to fund your expeditions on other islands. Load your boat with precious resources, then return them to the resource-poor Thera to earn the drachmas you need to purchase more map cards.

No matter where your expeditions take you, always remember to act quickly. Other explorers also seek the lost temples and only the most cunning will be remembered by history. 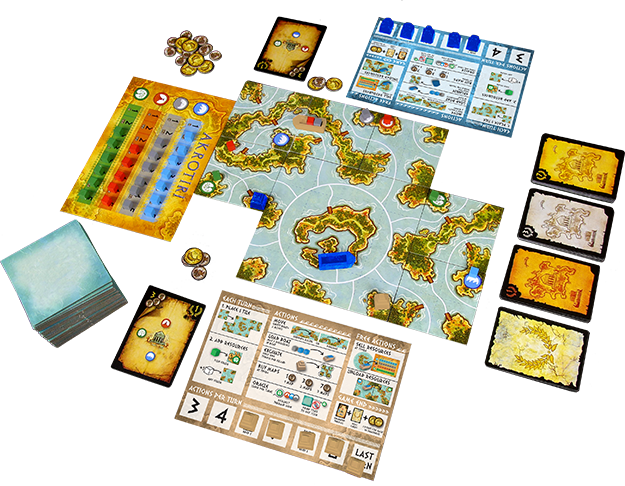 The Stakes Have Been Raised

Since its successful debut in 2014, Akrotiri designers Jay Cormier and Sen-Foong Lim have converted the feedback they received from the game’s many fans into several improvements that can be seen throughout the revised edition.

Originally conceived as a multiplayer system, the original version of the game was eventually refined to become the strategic 2-player affair it is known as today. Now players can experience “multiplayer Akrotiri” with the revised edition. With two copies of the game, up to four players can join in the search for legendary temples.

By combining all components from one copy of Akrotiri with the drachmas from another, additional players will be ready to launch their own expeditions. Furthermore, to differentiate from previous printings, the new edition contains player components in new colors. 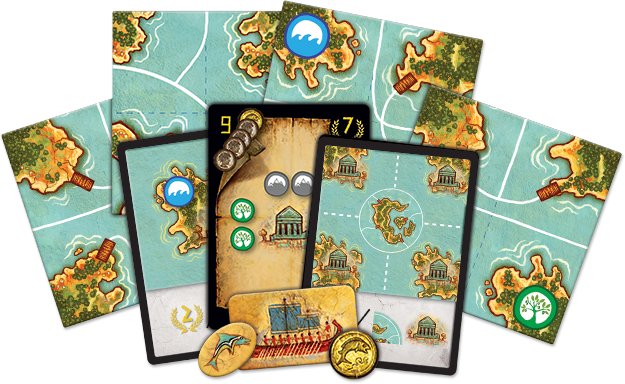 With more players, the stakes have never been higher. There’s less time to excavate, islands are more crowded, resources are in short supply, and the glory of discovering temples even more important. For this reason, the revised edition rulebook contains several tweaks and updates to maintain balance. The point values on a few goal cards are adjusted, for example, and the rules for discovering temples are clarified.

A World of Adventure

Your destination lies far across unknown waters. It will take all your cunning to reach the temple that lies there before your opponents.

Set forth on a voyage of discovery with the revised edition of Akrotiri, available now!