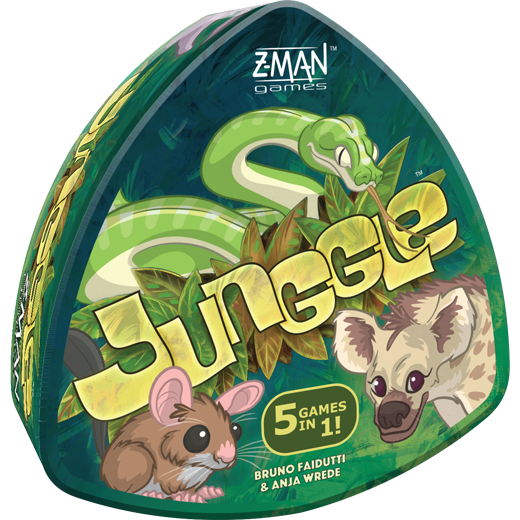 Many majestic animals live deep in the heart of the jungle. It’s a great place to live and play, but sometimes the jungle can be a scary place. The tiniest mouse, the strongest lion, and the biggest elephant must all live in harmony if they want to find their place in the world. Join them in their natural habitat as they learn to coexist together! 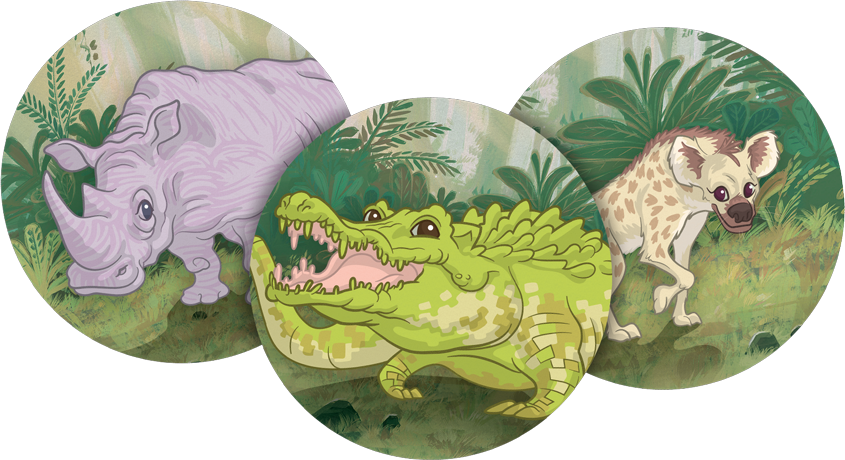 The five games included in Junggle can accommodate groups of almost any size, making it equally suitable for couples, families, or entertainment for an entire party. What’s more, with quick playtimes ranging from ten to fifteen minutes, Junggle offers you the flexibility to play several games in a row or get a quick game in at lunch.

The Circle of Life

Life in the jungle is a delicate balance. Some animals might be bigger than others, but all are important to the majestic web of life that flows through the jungle. In Junggle, the relationship between the seven animals is illustrated by the animal wheel that is at the heart of all five of the games. 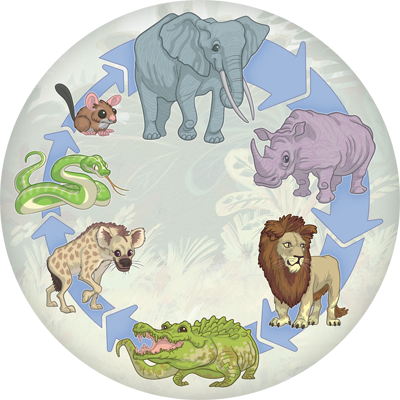 Inspired by the traditional Chinese game of Dou Shou Qi, or Jungle Chess, the animal wheel allows each game to explore new possibilities. All five of the games in Junggle use the animal wheel in a fresh new way, each requiring a different skill, from quick thinking to bluffing to fast reflexes. No matter which game you choose, you’re invited back to the jungle for a fresh and exciting experience every time you play.

It’s Good to be King

On the animal wheel, the animals live in perfect balance. Every animal is scared of another, preventing any one animal from dominating the jungle for too long. But if one animal is missing, another no longer has anything to fear. In “King of the Jungle,” one of the five games included in Junggle, players frantically rush to have this elusive animal in their hand at the end of the round. 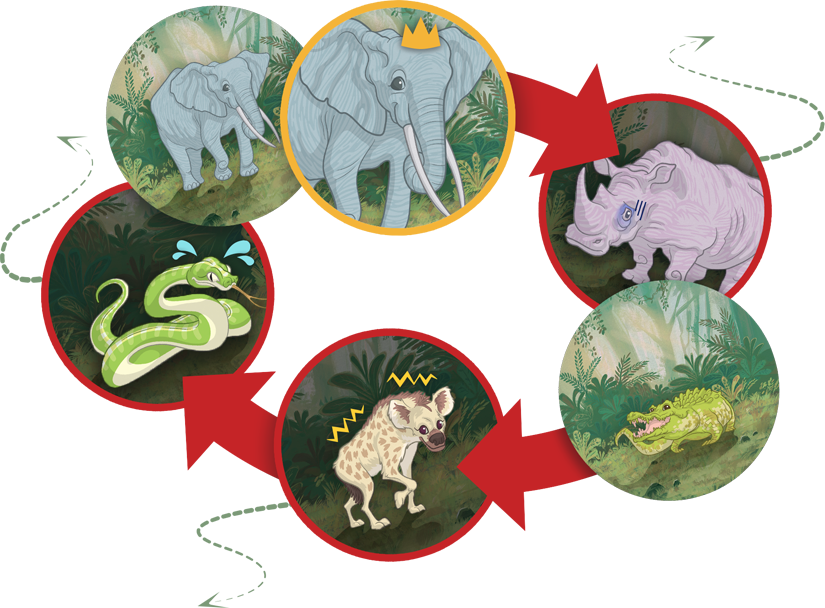 Since there is no mouse and no lion, the elephants and the crocodiles are not scared. Since elephants have a higher rank than crocodiles, the largest elephant is the king.

At the beginning of this quick and thrilling game, the top ten cards of the deck are placed facedown in the center of the table. When everyone is ready, players simultaneously begin secretly looking at one card at a time, attempting to identify which card is the “king of the jungle”: the highest ranked animal that is not scared of any other animal or, if all of the animals are scared, the smallest mouse. Once everyone is satisfied with their card, all cards are revealed and, if someone picked the king, they win the round.

“King of the Jungle” demands quick thinking and is a great way to familiarize yourself with the animal wheel before venturing deeper into Junggle.

Party in the Jungle

Where “King of the Jungle” is a fast game of rummaging through the cards, “Jungle Party” uses the animal wheel to create a tense game of deception and bluffing for two to five players. In this game, players are given two face up cards that form their “party,” and two cards for their hand.

On their turn, a player draws the top card from the deck and chooses one of the three cards in their hand to push facedown toward another player. Without looking at the card, this player must then decide if the card will join their cards or if it will return to the original player. The card is then flipped and added to the party that was chosen, with all scared animals in that party being discarded. 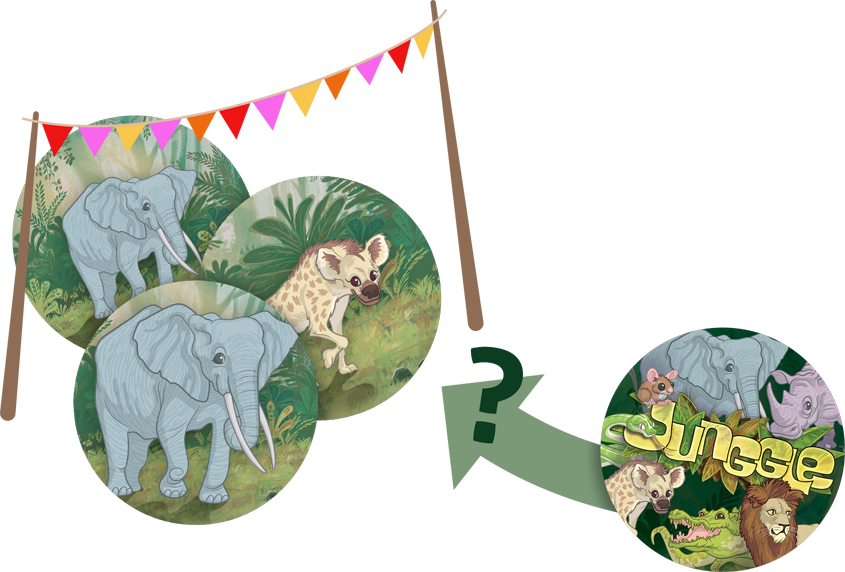 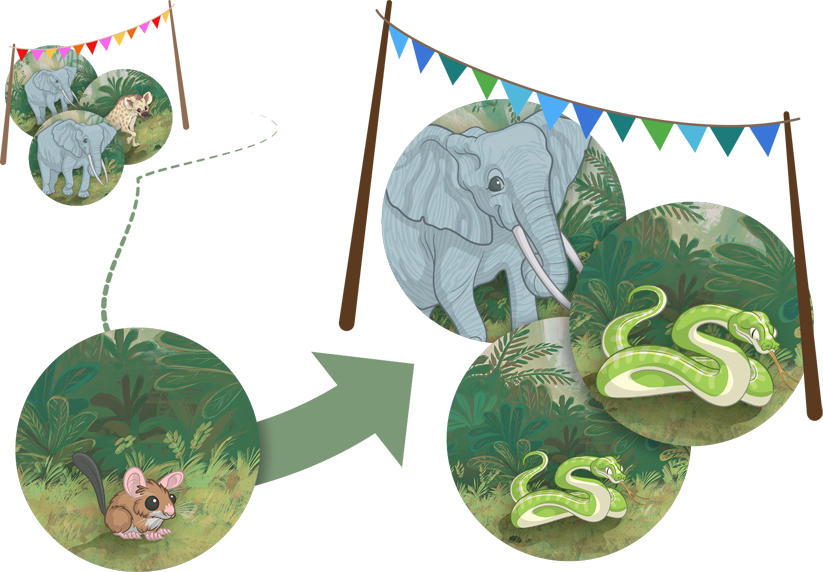 He refuses it, so Anna must reveal it. It is a mouse that she immediately adds to her party. 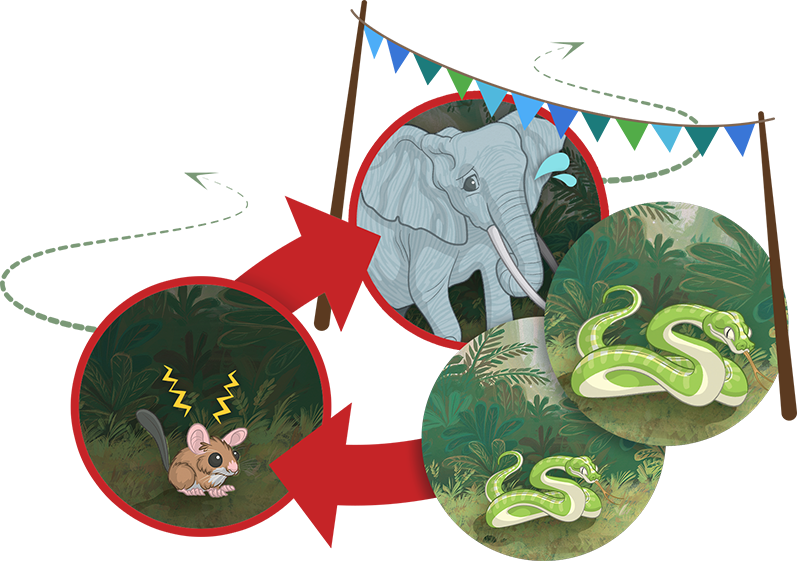 The mouse scares the elephant and is scared of the snakes. As a result, Anna ends up with only two snakes in her party.

With this premise, “Jungle Party” is a game of bold moves and exhilarating bluffs. Do you really give your friend a card that will help them out? Can you keep your cool and figure out the right move when someone pushes a card towards you? Only the player best able to read their opponents and manipulate their actions will collect five unscared animals and win the game.

Welcome to the Jungle

In the jungle, each animal has its role. All of them, big and small, are connected. Out of this interconnectedness springs possibility and potential.

Explore the exciting variations in this vast web of life in Junggle, coming soon! And stay tuned for more articles previewing the other games included in Junggle.