Through the Desert Joining Euro Classics 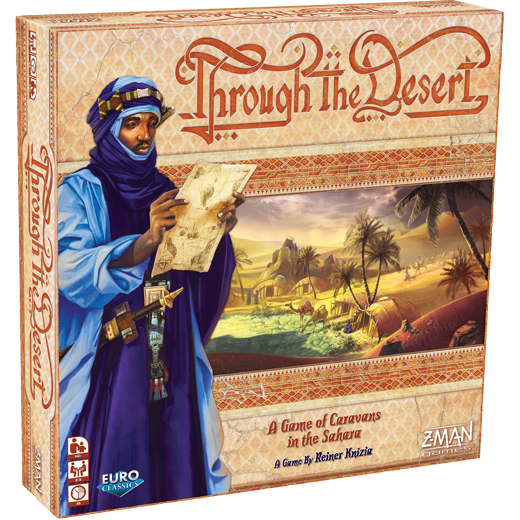 Z-Man Games is proud to announce Reiner Knizia’s Through the Desert will be joining the Euro Classics line of games!

Fans of Through the Desert got their first taste of the game when it was originally released to critical acclaim in 1998. Now, Dr. Knizia’s beloved classic sports an updated look that will appeal to longtime fans and new players alike when it is released later this year.

The vast, arid expanses of the desert are as mysterious as they are treacherous, incapable of supporting life for long.  As a Tuareg trader, you lead your caravans across the sweeping sand dunes of Northern Africa, seeking to secure access to as many precious water sources as you can. In Through the Desert, two to five players venture across this inhospitable landscape, expanding their caravans ensure that their tribe is the one that controls the trade in the Sahara.

A Most Precious Resource

The new Euro Classics version of Through the Desert maintains the engrossing gameplay of the original while updating the visuals to match the modern standards set by the rest of the Euro Classics line.

Hidden amongst the sands of the desert, one treasure stands above all others: water. The most successful Tuareg tribes control the water supplies along their routes, allowing them to more easily expand their control. In Through the Desert, players follow in the footsteps of these tribes, striving to score points by discovering watering holes, linking oases, and enclosing areas of the board through the strategic placement of their camels.

Each player begins the game with a single camel in five different colors and, on their turn, they add two camels to their caravans. As trade routes slowly stretch to the far reaches of the board, strategic camel placement becomes increasingly important. Clever players will find ways to reach sources of water while keeping their opponents from doing the same. 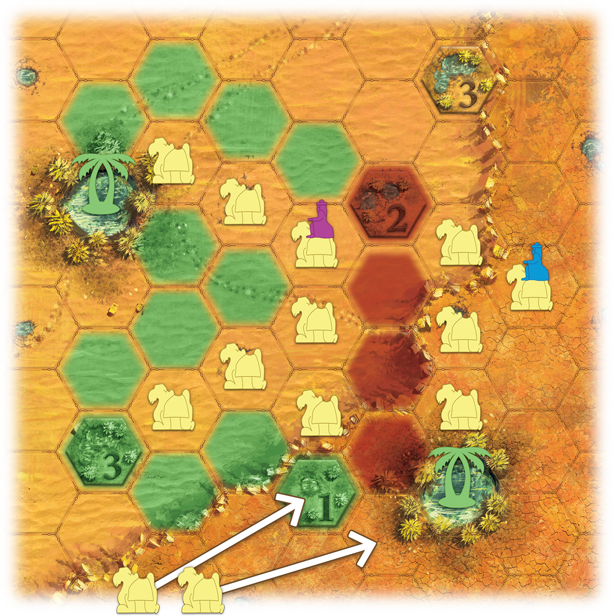 Thoughtful development of each of your caravans is an essential part of your strategy in Through the Desert. Your camels will not only help you reach valuable water supplies, but careful positioning will prevent other players from reaching these precious resources. Each turn you will extend your caravans across the desert while denying your opponents’ the best trade routes.

Jewels of the Desert

Within the heat of the desert, not all sources of water are created equal. You might come across a lush oasis, or little more than a large puddle. These water sources will quench you and your camels’ thirst no matter what, but are worth a varying amount of points depending on their size. Waterholes are worth anywhere from one to three points while an oasis awards five points to any caravan that reaches it.

While securing a steady supply of water is important, the ultimate goal of your journey across the desert is to establish trade routes that will allow your tribe to flourish. If you can manage to surround an area of the board with a single caravan, you’ll score one point for each space within the enclosed area, as well as points for any oases and waterholes in that area. 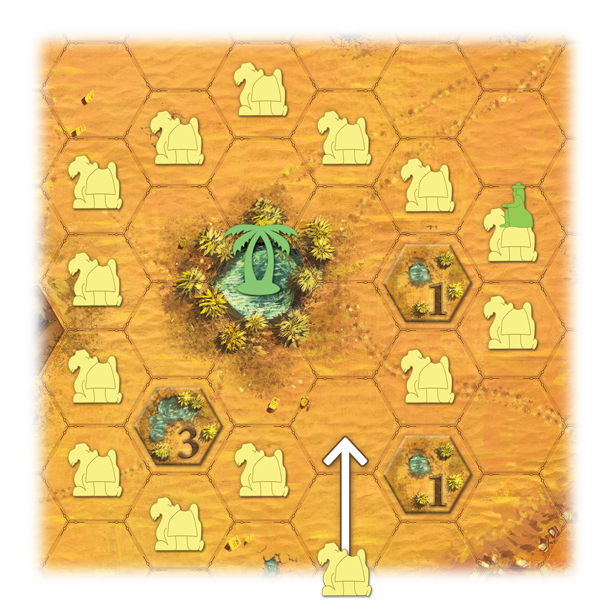 The green player encloses the area by placing a yellow camel. She was not already linked to the oasis, so she takes a 5-point token as well as the two waterhole tokens in the enclosed area. At the end of the game, she will receive eight points from the spaces in this enclosed area.

Take advantage of the terrain and placement of your caravan leaders to claim territory and force your rivals to find their own path.

The river is an enticing source of water that almost every caravan will want to cross at some point. With so many eyes turned toward it, however, there will undoubtedly be stiff competition for the prime areas as intrepid players attempt to block their rivals’ access and claim large sections for themselves.

In addition to the new board, Through the Desert provides new gameplay variants that will keep your group coming back for more. By selecting different variants players can adjust the order in which caravan leaders are placed, or obscure everyone’s score by keeping the waterhole tokens you collect facedown. Whatever way you choose to play, Through the Desert will surly to be a journey to remember.

The desert is an unforgiving environment, but it is still your home. Leading your tribe across these vast, arid expanses takes courage. Only those brave and clever enough to rise to the desert’s challenge will survive.

Mount your camel and forge your path in Through the Desert, arriving soon!