Lead the Netherlands into the Industrial Age in the latest version of the cooperative classic!

Z-Man Games is happy to announce Pandemic: Rising Tide, the next title in the new Survival Series of Pandemic games!

Following the widely popular Pandemic: Iberia, the next game in the Survival Series, Pandemic: Rising Tide introduces players to an entirely new way to enjoy Pandemic. It is the dawn of the Industrial Age in the Netherlands. For centuries, the country has relied upon a series of dikes and wind-powered pumps to keep it safe from the constant threat of flooding from the North Sea. But this system is no longer enough.

As the next game in the Survival Series, Pandemic: Rising Tide continues the hallmarks of the series. Each game enjoys a strong resemblance to the original Pandemic while uniquely adapting them to a new locale. On the lakes and polders of the Netherlands, the threat is not from diseases but from the water itself. With land becoming more and more scarce and water levels rising by the day, a modern system is needed to stem the rising tide.

In Pandemic: Rising Tide, it is your goal to avert tragedy by constructing four modern hydraulic structures in strategic locations that will help you defend the country from being reclaimed by the ocean. Storms are brewing and the seas are restless. It will take all your guile to control the flow of water long enough to usher in the future of the Netherlands. It’s time to get to work.

In the Netherlands, dealing with water is a way of life. The Dutch have long used their ingenuity to create elaborate systems of dikes, dams, and floodgates to provide flood protection and create additional land for agriculture. But in a country where just a little rain can raise the water to dangerous levels, the failure of a single dike can send water spilling across the lowlands, destroying crops and displacing the population.

In Pandemic: Rising Tide, containing the water that threatens to consume the countryside is your greatest challenge. Water levels in a region are represented by cubes and, as the water containment systems currently in place begin to fail, more water cubes are added to the board. With water levels constantly on the rise, failure to maintain the containment system could quickly lead to water spilling across the board.

Water flows from regions with lots of water to surrounding regions with less water. This means that two relatively minor incidents, such as the failure of a single dike and a flood, can lead to water quickly spreading across the country.

To successfully build the four hydraulic structures needed to win a game of Pandemic: Rising Tide, then, you must first learn to predict and manipulate the flow of water. Failing to maintain safe water levels throughout the country can bring you perilously close to failing your mission. Fortunately, water can be corralled by a strategically placed dike or slowed by pumping water out of a region. Correctly identifying and intervening in at-risk areas can get you one step closer to victory.

Reclaiming land from the sea is no simple task. Thankfully, the hydraulic engineers, sanitation workers, and builders have developed effective methods of controlling the water that should come in handy. As you sail the water-filled regions of the Netherlands, you can build dikes to keep water out of sensitive areas, ports to facilitate travel, and pumping stations to remove water from the flooded lands.

Operated by windmills, pumping stations are invaluable resources. These structures allow you to remove water cubes after every player’s turn, making your operations quite efficient. Each pumping station can remove one water cube from any region connected by the flooding. Each region in this path must contain a water cube and cannot cross seas or dikes. 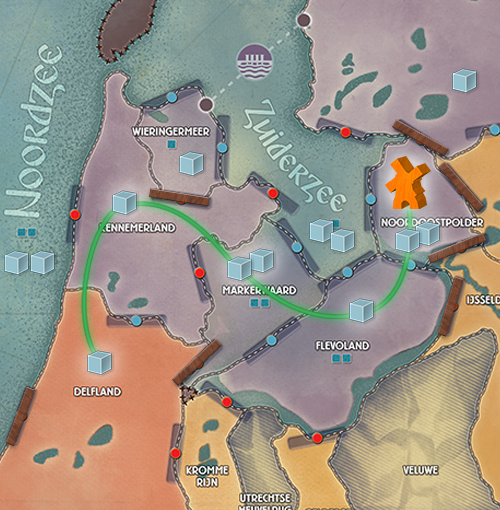 This makes the combination of pumping stations and dikes a potent combination. When placed carefully, you can protect regions from taking on water and drain existing water all at the same time.

Wonders of the World

Despite being effective for years, the methods of the past are no longer enough to keep the country safe. You will need to construct four massive hydraulic structures if you want to cement your legacy. These projects are massive undertakings that, when taken together, are heralded as one of the Seven Wonders of the Modern World!

This means that constructing one not only brings you closer to winning the game, but also grants you an immediate benefit. One of the most impressive of these is the Deltawerken. Completed in 1997, this elaborate system of dams, sluices, locks, dikes, levees, and storm surge barriers actually shorten the Dutch coastline to protect the country from the rising seas.

Constructing the Deltawerken lets you immediately place dikes in five spaces adjecent to the Noordzee.

In Pandemic: Rising Tide, the Deltawerken helps reduce the threat posed by the North Sea. When it is built, you may place a dike adjacent to the Noordzee in five regions in the southern portion of the map. With these dikes in place, these remote regions are relatively safe, letting you focus on other projects.

Clouds gather and the seas are churning. With storms on the horizon, there’s no telling how long the dikes will hold. Fight back the encroaching seas in Pandemic: Rising Tide!

Join the struggle and stem the tide—Pandemic: Rising Tide is scheduled to be released in late 2017. Head to your local retailer to pre-order your copy today, or you can place your pre-order here. At Z-Man Games, we want to do our part for those affected by Hurricane Harvey. For every pre-order we receive through our website, we will donate $5 to hurricane relief efforts.