In the Heart of the Junggle

Join as as we preview the mini-games included in Bruno Faidutti and Anja Wrede's Junggle!

In Bruno Faidutti and Anja Wrede’s Junggle, the animals interact differently across five mini-games. Using the same deck of cards, each mini-game explores new mechanics and is as unique as one of the animals that call the jungle home. 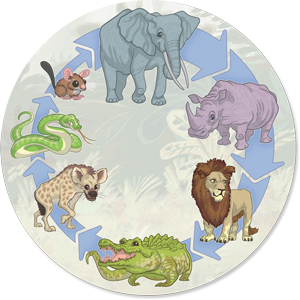 In our announcement, we covered “King of the Jungle,” during which players scramble to find the animal that is not afraid of any other, and “Jungle Party,” a tense game of strategic moves and bold bluffs. Join us today as we look at the other three mini-games and how they make use of the deck and animal wheel.

Wild Beasts and Where to Find Them

Many venture deep into the heart of the jungle hoping to catch a glimpse of rare animals, but tracking these animals down without scaring them off can be a tall task. In “Lost in the Jungle,” players must exhibit such caution. With all of the cards placed facedown, players must carefully decide where to explore as they search for as many animals as possible without scaring them. They’ll encounter several beautiful creatures during their expeditions, but every step they take deeper into the jungle could stir up something that scares the other animals off.

The player decides to stop flipping cards. The three snakes are scared of the hyena and flee back to the jungle. The player keeps the rhino and the hyena.

To see more animals than the other players, then, you must boldly push your luck while relying on your memory to guide you through the jungle. On your turn, you must decide if you want to continue searching for more animals by flipping more cards or to stop and take all the animals that are not scared. Cunning explorers will strike a balance between keeping what they have and pushing forward into the unknown.

The Biggest and the Baddest

In the jungle, size matters. With the exception of the elephant, all of the animals are scared of larger animals. What’s more, larger animals of the same species tend to dominate their smaller peers. With this in mind, players in “The Watering Hole” mini-game must take advantage of these size differences in order to round up as many animals as they can.

Animals come from far and wide to drink from the watering hole, making it an ideal place for predators to track down their prey. In this game, players attempt to take advantage of this situation by “capturing” cards at the watering hole. Beginning with a single card at the watering hole, everyone tries to guess which animals this one will attract and plays one of their eight cards accordingly. If they’re right, a player captures the animals scared of their card.

“The Watering Hole” is a game of anticipation, bluffing, and outguessing your opponents. To succeed, players must determine the best time to play their cards while also deciding which cards to keep back. Clever players will anticipate which cards their opponents will play to maximize the number of cards they capture each round.

Life moves quickly in the jungle, and many of the animals rely on their speed to survive, using it to hunt down their prey or to scurry away from predators. “Rumble in the Jungle,” the final mini-game included in Junggle, tests your own speed and quick-thinking skills.

Like a predator lying in wait, this game forces you to rely on your instincts and quick-thinking skills to win. During a round, players simultaneously flip the top card of their personal deck and then race to see who can then slam their hand down on an unscared animal the fastest. The result is a lightning quick game of finding a proper target.

Not only does “Rumble in the Jungle” test your reflexes, it also rewards those who have internalized the animal wheel. Like a jungle animal, you must properly identify your prey before you pounce or you will be punished. Successful players will learn the animal wheel so well that they operate on pure instinct, innately knowing which animals are scared from those that are not.

The jungle is home to many amazing creatures. Although they share a home, they lead very different lives. Some, like the crocodile, scour the jungle’s waterways waiting patiently for their prey. Others, like the hyena, prowl the night looking for their next meal. The five mini-games in Junggle capture this variety by using these animals in exciting new ways.

Many adventures await you deep in the jungle. Start your expedition with Junggle, available soon!