Establish your influence across Italy

Order Condottiere at your local retailer
or online through our website today!

The bell tolls across the city’s bustling marketplace. Spices, cloth, and jewels fill the market stalls. The offering is plentiful, with vendors loudly barking out prices for their wares. Recent trades have been kind to the city, and riches abound.

Suddenly, a drumbeat echoes in the distance. The hum of the city quiets, listening as the cadence continues its steady approach, getting louder with each thunderous boom. An invading army has arrived.

We are thrilled to welcome Condottiere into the Z-Man Games catalog. For those new to the game, you’re in for a treat as Condottiere is widely revered as a modern classic for its delicious player interaction, flexible player count, and compact package (big game, small box). For longtime fans, read on to learn what’s new in this version of the game—and don’t forget to pre-order now through our website or your local retailer.

During the Renaissance Era, Italy was divided into numerous independent city-states. While bursting with wealth, the city-states’ growing concern over jealous neighbors invited the rise of the Condottieri, ambitious leaders of powerful mercenary armies. Players hire the Condottieri to engage in battle and establish influence in the many regions of Italy. If a player can claim three adjacent regions or five regions total, they gain control and win the game. However, players must be careful in how they send out their mercenaries, as only the strongest army will win the battle. How much will you risk to win? 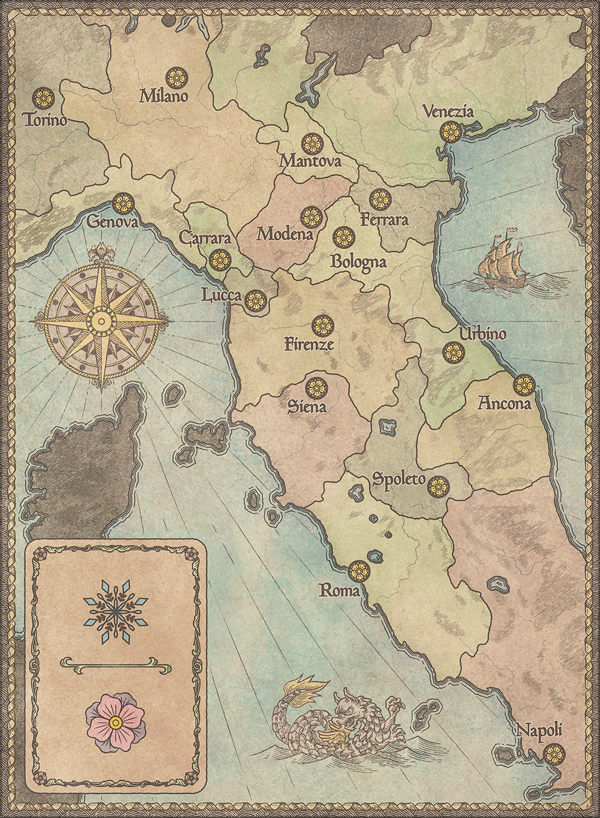 Players will need to strategically manage their army, sending out strong mercenaries to win the battle or saving them for the next battle, striking when their opponent is most vulnerable. The mercenary cards form the backbone of your army. From the lowly foot soldier to the menacing cavalry, players must carefully decide which mercenaries will enter the fray.

A battle isn’t just about brute strength though. Special cards will affect the battle in powerful ways, possibly turning the tide in your favor, so you’ll need to use them wisely to surprise your enemy and claim control. We’ll explore the special cards further in a future preview.

Each round has all players vying for the same desirable location in a veritable free-for-all. Player’s take turns in clockwise order, playing one card from their hand to either add to their army’s strength or use a special card to execute a brilliant stratagem. Complete with bold assaults and clever feints, Condottiere gives each general a chance to display their strategic prowess. At the battle’s end, the strongest army wins and takes control of the contested region. 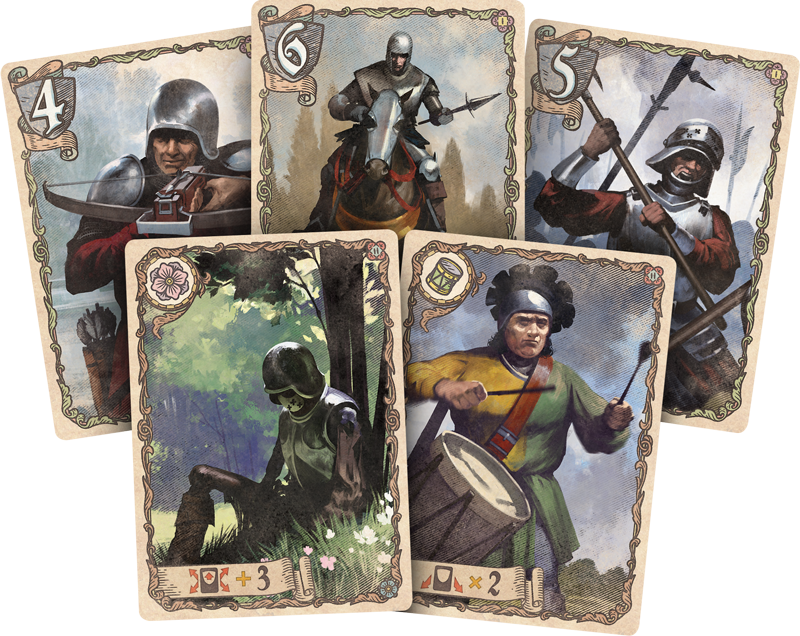 Tomasz Jedruszek’s iconic art style from the 2007 edition of Condottiere really grounded the game’s visual tone, so we invited him to put his years of experience to the test and do a new take on his earlier work. Fortunately, he was quite excited to revisit this project, and we’ll chat about the art and visuals more with him and the Z-Man creative team in a future preview.

In addition to the all-new art and graphics overhaul, this version of the game boasts some exciting new features:

We’ll touch on all these features and more over the coming weeks.

Will you boldly march into the conflict, or will you carefully draw out your opponent and exhaust their army? Whichever choice you make will reshape the Italian landscape for generations to come. Prepare for battle by pre-ordering your copy of Condottiere today!