Protect the glowing noctiluca from the raging tempest 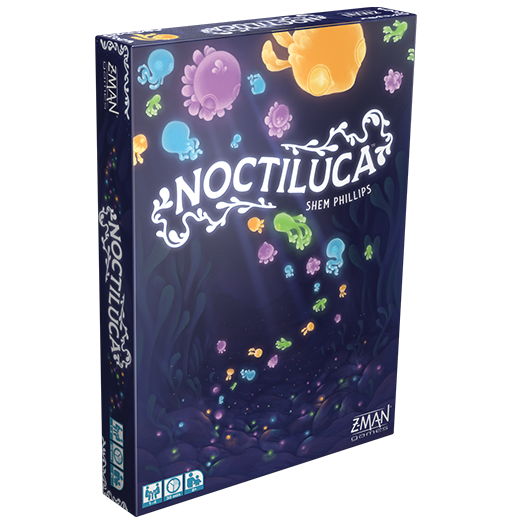 Order Noctiluca at your local retailer or online through our website today!

You stretch your arms wide, invigorated by the afternoon air and the gentle swirling colors of the noctiluca. Finally, your competitors have departed, and you have the pool all to yourself; a perfect opportunity to gather exactly what you need.

A faint breeze shifts the pool, and your smile fades. In the distance, there are dark clouds gathering on the horizon. Thunder rumbles. As if feeling the coming storm, the noctiluca in the pool begin to rapidly swirl. You know they'll soon scatter to avoid the coming storm, diving into the darkest depths of the pool beyond the reach of even the most skilled diver. Looks like this won't be an easy day after all.

After competing with your friends to prove your skill, you'll find a new challenge to overcome with the Noctiluca solo rules. Using the dedicated numbererd side of the double-sided board, you will have the pool to yourself, but will need to hurry before the noctiluca are scattered by the raging tempest. Order your copy through our webstore or your local retailer to get ready to save the noctiluca!

Storm on the Horizon

When setting up a solo game of Noctiluca, you will use the reverse side of the game board. The solo board is divided into 3 different colored sections, with numbers 1 through 6 on the hexes in each section. All of the jar cards are shuffled into a single deck, and the first player marker is placed in the center of the board, pointing at one section.

In the solo mode, you take a turn as normal in Noctiluca, placing a pawn and collecting noctiluca dice from the board. Just like in the multiplayer game, you won't want to collect any dice you can't place; each die you can't place will be set aside and will count against you at the end of the game. However, after each of your turns, the howling winds and crashing rain will startle the noctiluca in the pool, sending them scurrying out of your reach.

In addition to the dedicated solo board game side, the solo mode also uses a dedicated black die to represent the wandering impact of the storm threatening the pool. After you take each of your turns, you will roll the black die and remove all noctiluca dice from the space on the board matching the number you rolled in the section that the first player marker is pointing at. Finally, you'll rotate the first player marker so that it points to the next section of the board, ready for the next turn.

After taking dice from the pool, your jar cards may be full. Full jars are delivered for points, just like in the multiplayer game. You'll take the top token from the stack matching the color of the jar. Then you'll take a new jar card, drawing two cards from the deck and choosing one to keep.

In addition to dice being removed from the board, point tokens will also be removed. Each turn, the top card of the jar deck is discarded faceup. You'll check the color on the jar card (gold, brown, or red) and set aside the top point token from the corresponding stack. Each of these tokens will count against you at the end of the game, so you'll have to work hard to keep up! 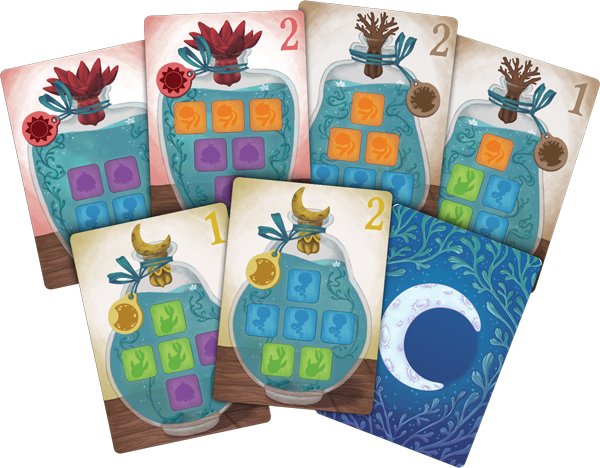 In the solo mode, you'll start the game with six pawns. After those six pawns have been placed, the first round ends. You'll take the other six pawns to use for the second round, but the pawns you placed during the first round will remain on their shores, blocking you during the second round of the game. After you've placed those six pawns, the game will end and you will compare your final score with the total of the set-aside point tokens and passed dice. Just like in the multiplayer game, you will get all the remaining point tokens in a color facedown if you have a majority in that color. However, if the majority has been set aside by the tempest, the remaining tokens will be as well. If your final score is higher, you've overcome the challenge!