Assemble Marvel Heroes or seek the powerful Infinity Stones as Thanos in a new edition of the beloved card game! 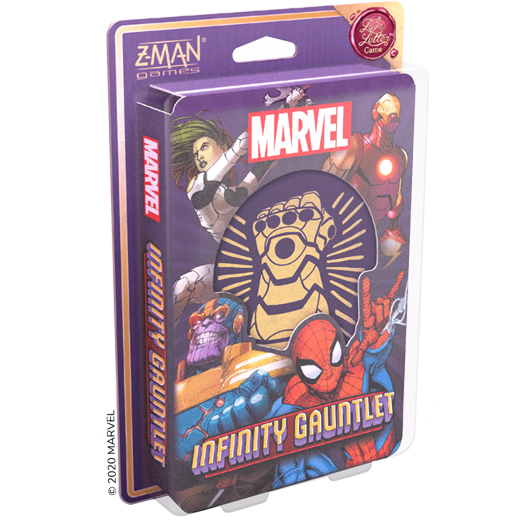 The Mad Titan Thanos is on a crusade to find the six Infinity Stones, but a team of mighty heroes has assembled to stop him. In an epic battle for the fate of the universe, whose hand will win the day?

Introducing Infinity Gauntlet: A Love Letter™ Game, a new one-versus-many twist on the bestselling card game set in the Marvel Universe. Play as Thanos himself and seek ultimate power or assemble beloved Marvel heroes to stand against him. Act decisively—your choices will decide the course of history.

Preorder now online or through your local retailer!

A BATTLE OF WILLS

In Infinity Gauntlet, your power lies in the cards. One player takes the role of Thanos, seeking the Infinity Stones, while 1-5 other players use the powers of iconic Marvel heroes to thwart his efforts. Turn by turn, the heroes must work together to knock Thanos’s life down to zero before he can do the same to them—or gather all six Infinity Stones and win with a snap of his fingers.

As in the original Love Letter, players go around the table, taking turns drawing a card and playing a card. While Thanos draws from his deck of minions and powerful Infinity Stones, the hero players assemble iconic Marvel heroes from their own deck to help their allies, fight Thanos, and gather information about his next move.

A powerful adversary, Thanos plays with a two-card hand instead of one. On his turn, he might deploy an Outrider to try and guess a hero’s card to defeat them, knocking the hero players down a life point. Or, he might choose to call upon a member of the Black Order, such as Ebony Maw, who will use his skills to help Thanos draw an additional card and place a card at the bottom of the deck. Use minions’ abilities to keep the heroes at an arm’s length while you work toward your main end—the Infinity Stones.

Though Thanos’s minions provide useful assistance, the Infinity Stones offer him immense power with even stronger abilities. As Thanos finds the Infinity Stones in his deck one by one, he can play them like any other card for their powerful effects. Playing the Power Stone garners him 3 power tokens, providing a boost to his next fights. Perhaps on his next turn he plays the Space Stone, allowing him to fight up to 2 different opponents in one go. Utilize your minions and the Infinity Stones at the right times to defeat your opponents!

In order to defeat such a powerful enemy as Thanos, the hero players must band together and utilize their abilities in strategic combinations. One player might play Gamora on their turn to allow an ally to peek at a card in Thanos’s hand, then that ally plays Spider-man on their next turn to guess that card and knock Thanos down a life point. Or, a hero player could call upon Black Panther to gain a power token, hoping that their teammate will play Captain Marvel to send them into a fight with Thanos that they can win.

Deploy your favorite Marvel heroes or attempt to defeat them as Thanos—the fate of the universe is in your hands. Preorder now or look for Infinity Gauntlet: A Love Letter™ Game when it hits shelves in summer 2020!