Claim resources for your tribe

You crouch behind a rock at the edge of the grasslands, carefully listening. The grass rustles and you slowly look around the rock to spot your prey: a deer gently nibbling at the long grass. You heft your spear. Tonight the tribe will eat well.

Before there were tall stone castles and walls, there were forests and rivers filled with wildlife. The classic tile-laying gameplay of Carcassonne journeys to the prehistoric era in Carcassonne: Hunters and Gatherers! Players will take turns placing tiles to expand and explore the wild landscape, aiming to find natural features and resources for them to claim for their tribe’s survival.

As you and the other players place tiles down and the prehistoric landscape grows, you’ll be able to place your meeple as a fisher, gatherer, or hunter. Each role will lay claim to different features in the landscape and score different points.

Cool, refreshing rivers run through the landscape and they’re filled with fish! When you place a tile with a river, you may choose to place one of your meeple onto that river to become a fisher. Only one meeple can be on a river at a time but you can place a hut instead if another player’s meeple has already claimed that river.

When a river is completed, meaning that both ends are closed by lakes or forests or it has looped back to connect to itself, this feature is scored. The player who has a meeple on the river will score the points. In this example, blue placed the title that completed the river red was on. So the red fisher meeple is removed and red scores 5 points: 3 points for the 3 tiles forming the river and 2 points for the 2 fish in the lakes attached to the river. The blue player then puts their meeple onto the right side of the lake, claiming that new section of river.

As the river winds around the land, keep a close eye on strategic opportunities to snatch up extra fish for more points when fishing!

The trees stretch high above you, promising tasty nuts and berries if you’re brave enough to venture into the forest.

Land tiles will have grass and forest on them and must be placed to continue the growing landscape. A tile with a forest edge can be connected only to another forest edge. Similar to the river, when you place a forest tile you may place a meeple onto that tile if no other meeple is present on that forest. A meeple placed on a forest is a gatherer.

A forest is considered to be complete when it is surrounded by grassland and has no internal gaps. Once this has happened, you’ll score the completed forest. The player who has claimed that forest will get 2 points for each tile in the forest. In the example below, the forest has four tiles, giving the red player 8 points. In this instance, since the forest completed also has a menhir (a massive stone block) in it, the player that placed the tile that completed the forest gets to draw a bonus menhir tile and place it, then place a meeple and score newly completed features if they are able.

Wandering the grasslands you’ll find mammoths, aurochs, and deer. A truly skilled hunter will know the right path to take to carefully sneak up and catch these animals to provide food for the tribe. But beware, you aren’t the only hunter out there in the grasslands. Saber-toothed tigers will snatch deer away, affecting your final score.

Just like the river and forest, you’ll place your tile and match up the features. The grassland on the tile must continue the landscape already placed. When you place a tile with grassland, you may place a meeple a hunter. This time, however, the meeple is placed lying down, not standing up. Hunters will remain on their tiles until the end of the game and score points based on the number of animals on their grassland.

In the example below, the red player is able to place their meeple down to claim that grassland because the blue player’s claimed grassland is separated by the river. 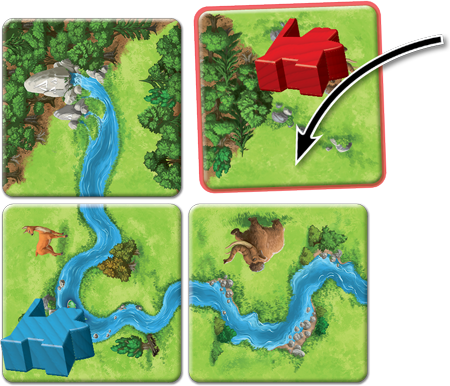 At the end of the game each hunter will score points for the animals caught in their grassland. A mammoth will feed the tribe for days and is worth 3 points. The auroch, though not as large, is still a good prize and is worth 2 points. A deer is worth 1 point, however each saber-toothed tiger in your grassland will remove a deer.

Since Carcassonne: Hunters and Gatherers was first released in 2002, it’s become one of the most popular standalone versions in the Carcassonne series. This new edition of Hunters and Gatherers includes all the same great gameplay, plus updated art and additional menhir tiles with unique effects. Will you be the one to claim the most points and help your tribe survive in this prehistoric world?

If you'd like to try the game virtually, make sure to head over to Tabletopia to try it for free!