A new baby brother and two new friends join the fun in the new Stuffed Fables expansion, Oh, Brother! The Fall have returned, and now, years later, the new baby brother is in need of protection. Can the brave stuffies, and newcomers Pokey the Unicorn and Manny, save the day once again in this new story? 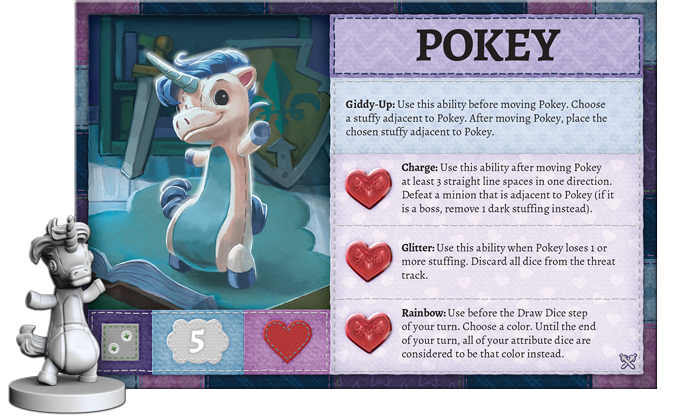 In this new bedtime story adventure, two new friends join the fray as playable characters. First up is Pokey the Unicorn, the baby brother’s first and most adored toy. Unlike the other stuffies, Pokey has no need to equip weapons. Instead, she uses her Puffy Horn to fend off enemies.

Pokey specializes in not only fighting weaponless, but also assisting other characters and keeping enemies at bay. Her active ability, Giddy-Up, allows her to take an adjacent ally with her when she moves, and her Charge, an earned ability, gives her an opportunity to completely defeat a minion if she moves at least 3 straight line spaces in one direction towards it. However, outside of combat, she also can use other earned abilities, such as Glitter to rid the threat track of dice, and Rainbow to turn all dice into a single color, greatly enhancing your strategic choices when used. 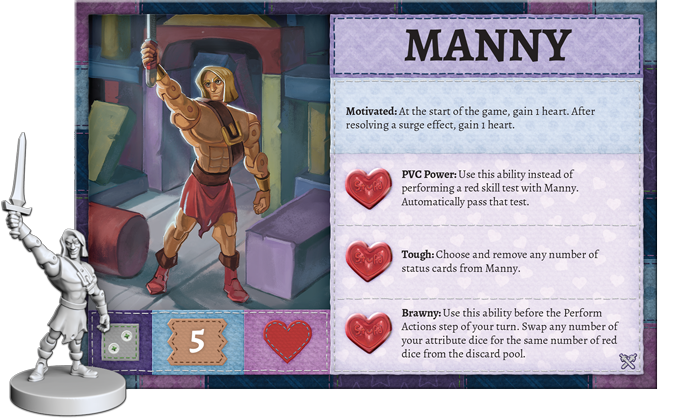 Manny is a toy from another age. One of Daddy’s toys when he was a child, Manny is a macho action figure made of strong plastic instead of the usual stuffing of other characters. This characteristic means certain status conditions don’t affect him like they would a typical stuffy.

Manny, as his outer shell shows, is all about strength and resilience. His active ability, Motivated, gives him a heart at the start of the game, as well as every time a surge effect is resolved, while one of his earned abilities, Tough, allows him to, at the cost of a heart, remove any number of status cards from himself. His PVC Power ability grants him instant success on a red skill test, and Brawny allows him to swap any number of attribute dice for the same number of red dice from the discard pile, ensuring tests of might are a breeze for this action figure.

Can you keep this new baby brother safe with the help of your new friends, Pokey and Manny? Find out by ordering the Stuffed Fables: Oh Brother Expansion wherever board games are sold.